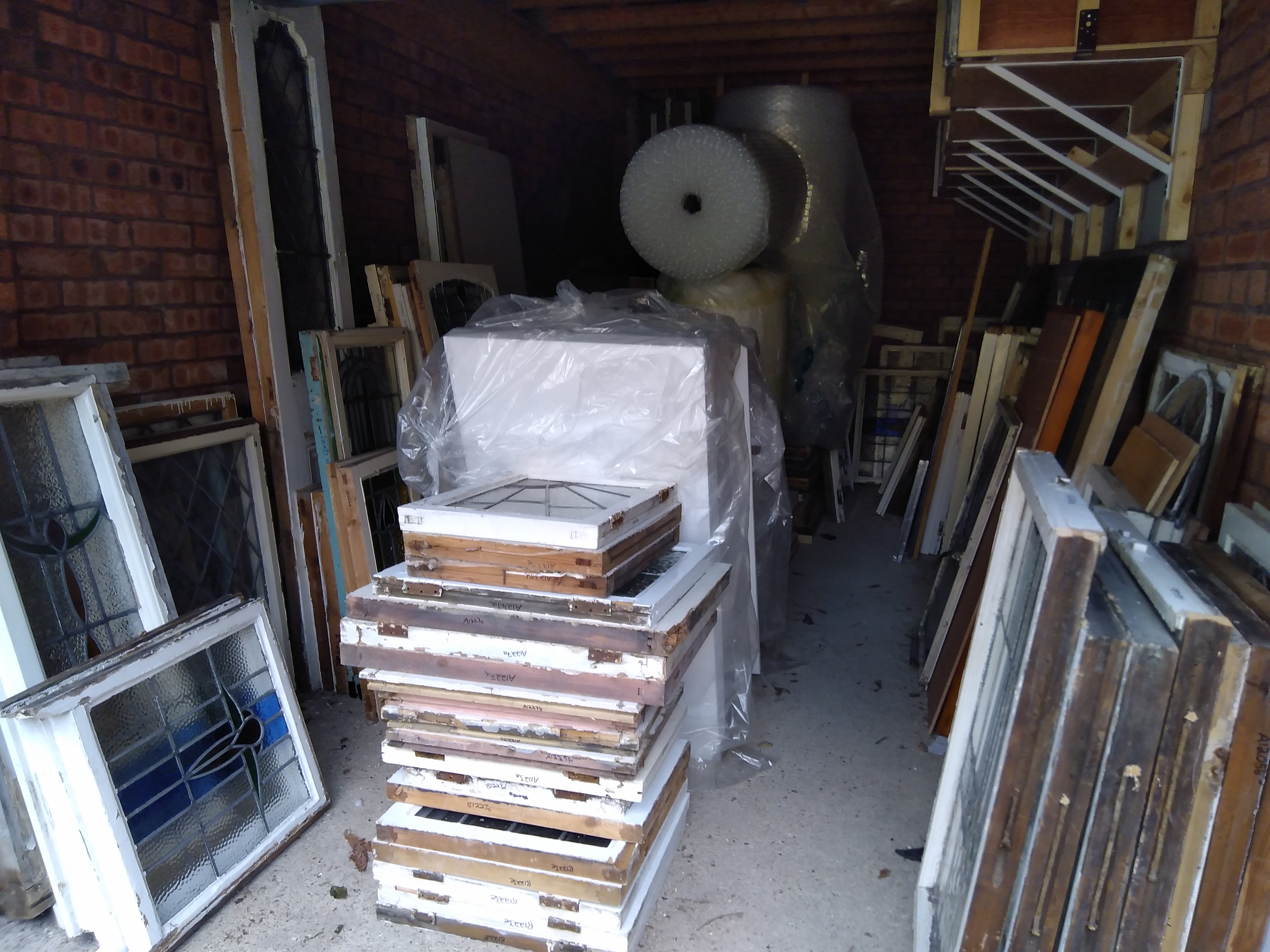 Many people assume that I have an abundance of space. That is understandable given the quantity of stock listed on my website – some even ask if they can visit a “yard” which I don’t have. I thought here I would explain the realities of dealing architectural salvage in one of the world’s most expensive cities for real estate. Also why I operate exclusively as an internet order business offering only delivery or “click and collect”.

Like in any of the London Boroughs, whenever I see an empty old industrial building in Harrow, which I think would be suitable for my business (and possibly affordable), it is soon replaced with flats.

People admire my range of stock but few appreciate how much space is needed for storage let alone suitable space to offer a browsing experience. I am often given the helpful suggestion that I should build a shed at the bottom of my garden. Of course I am lucky to have a garden but even if I were to let the public wonder into the back of my house it would not be big enough.

I understand that with the demise of the high street and online shopping being the default there is a demand for consumers to have an “experience”. Unfortunately there is no way I can afford to hire a modern industrial warehouse in Harrow to accommodate this. As you can see from the above photo of one of my storage rooms, for health and safety reasons these spaces are not appropriate for visitors.

A romantic perception of Londoners dealing in salvage is derived through television. This starts with the 1960s – 70s BBC sitcom Steptoe & Son in which, an eccentric father and son double-act live at their yard making a living as a rag-and-bone-man business. The perfect device for farce as situations arise from their dealing in unusual items. How wonderful to have a “yard” that big in the suburbs of West London where members of the public can just turn up. They do so unannounced which is of course a dramatic tool but not practical when operating a modern business staffed by one person. I need an Albert Steptoe but my father, while supportive, does not share a passion for dealing in other people’s rubbish.

Harrow is a bit further out from where Steptoe was fictitiously set in Shepherd’s Bush. I think it ironic that the old BBC Television Centre has been converted mostly into luxury flats as Steptoe & Son lived nearby and the episodes were recorded at those studios.

In the 1980s Only Fools and Horses depicted another pair of London traders who lived close to the breadline. One of the comic principles is that they have even less space than me. Trotters Independent Traders (TIT) was based in a high rise council flat. With no internet this would have made the logistics of trade completely unviable but this vital aspect of a small business operation is glossed over. As a long-term fan I cannot recall a scene where someone actually buys a physical product within the flat! I can relate to the absurdity as a trader having stock in your lounge. There are times when it is not funny as we all need to be able to switch off from work. Recently many more people are working from home but at least they can put their work away by merely folding down the laptop.

Like all London based wheeler-dealers one must have an iconic form of transport. I have a 25 year old Japanese import Toyota Lucida which I bought years ago for £900. It is starting to look odd among other vehicles. But I don’t care. It is fantastic for zipping around London and large enough to collect whatever I want in one day’s travel. Suffice to say it is not ULEZ compliant so that’s another cost I have to absorb given I am in London. I hire vans for occasional collection trips across Britain. Even if I could afford a new large van, where would I park it? There is no way I am discarding a reliable automatic vehicle of this size but its full merits are probably the topic of another post.

My internet research leads me to conclude there are no generic architectural salvage “yards” in London where you can just turn up and rummage through a pile of unsorted “stuff”. No one in this city has time or space to hold onto a variety of goods which come under this generic term. Even if they did I don’t know how this model would be financially viable. A Google search will direct you to interesting looking London businesses which make reference to the key words “architectural salvage” but looking past the glossy homepage photos they, like me, tend to specialise. Doors, flooring and furniture being the main offerings. They tend to offer a service in addition to products, examples being fireplace restoration and interior design. They lure people in with fantastic photos of architectural salvage but, like me, also offer a bespoke service as the reality is you will not find what you are looking for if you cannot be flexible with size.

I just deal in window glass partly since people know to come to me for that. It has always appealed to me because, while it can be large and extravagant, it is a compact product and thus relatively easy to package (see my examples). The storage of items such as cast iron bath tubs, furniture, shop fittings, flooring, railings, etc is one thing – it also requires at least two people to handle. Obviously staffing is the greatest cost for any small business.

All the large antique and collectible dealers I know of are based somewhere rural where space is affordable. In a post Covid e-commerce world it does not matter where in Britain you are based just so long as the major parcel courier companies are prepared to collect from you. Another traditional format of British architectural salvage trade is (was?) the huge international fairs. I have only been to one in my life. The idea of paying astronomical pitch fees to lug a van load of goods to a wet field for a 5am start never appealed to me. How are the international buyers going to buy now? It will be interesting to see.

Browsing a website might be a static experience but it is a practical way of finding things quickly and Ebay is another reason why there are no one stop-shop “architectural salvage yards” in London. I still try to offer an experience through my website. It is not just about selling. There is this blog, an ever growing gallery of customer reuse ideas and in my listings I try to tell a story of the item’s past (see this example). The website also has a basic archive of sold items. In time I intend to develop this as a resource for 20th century domestic stained glass history as certain patterns and glass were uniquely used in particular areas of England. If I have bought directly from a homeowner then I have logged the address – in time it could be a proper archive searchable by geography as well as pattern and glass type.

Why don’t I sell up and move away?

There are of course advantages to being in London. There is the customer footfall. I am a very short walk from an underground station but for many items I advise people not to collect using public transport. Again people have a misconception of how large and heavy architectural salvage is (and glass is fragile!).

I would love to sell up and move to an old farm which I can repurpose somewhere near the M25 or M1 but I stumbled upon this trade by accident. With a still young family there is no way we can uproot and I don’t want to commute.

Of course there is speculation that with the sudden decrease in the use of central London office space these buildings will need to be repurposed. That is the same for my local high street, but anyone dealing in architectural salvage needs parking space for themselves and their customers. London is not motorist friendly (not that I am saying it should be). As pretty as my stock is I need people to be able to take it away!

I have not written this blog post as a complaint. I am simply trying to explain why I operate the way I do. Since the pandemic I have set up a “click and collect” procedure which means customers don’t have contact with anyone at the place of pick-up. It seems to work conveniently given the restrictions on my time, so I am doing that permanently. But who can tell what will happen in the future. I am going to finish with some wise words from Steptoe & Son. I was partly prompted to write this post as one of my regular customers referred to himself as Albert Steptoe but declined to provide a photo of himself in costume! In researching I have started watching every episode from the beginning with my eleven year old son who, I was surprised to find, enjoys it. I noted this bit of transcript from episode 5, “The Diploma” first broadcast on 5th July 1962:

Harold: What you don’t realise is that the future of the rag and bone business is dependent on the total economy of the overall condition of the country as a whole.

Harold: You didn’t realise that, did you? I mean, you don’t read the Financial Times.

Albert: What’s that got to do with it?

Harold: Oh, you ignorant old man! Oh, it makes you want to weep, straight it does. It’s been in the papers every day, they’re going to ask you to vote as to whether we go in or not. What’s the point of them asking you, you think it’s a row of stalls up and alleyway.

Albert: What is it, if you’re so clever?

Harold: I’ll tell you what it is, the Common Market is Europe all getting together and flogging things to each other.

Albert: We do that now. What about that bloke that comes round every week with the onions?

Harold: That’s different! You mark my words, the Common Market’s going to make a great deal of difference to the totting business.

Harold: Well, they can come and go as they please. you wait till they build this tunnel under the Channel, that’s what you’ve got to worry about…all them foreign rag and bone men, a great queue of horses and carts stretching under the Channel, pouring out at Dover, stripping the country of its junk!

Category: Uncategorized
Please support small business and promote the reuse of materials by sharing my Instagram posts!
Subscribe to Blog via Email
All blog posts
Copyright

© Richard Cann and leadedstainedglass.com, 2015 – 2021. Unauthorized use and/or duplication of this site’s material without express and written permission is strictly prohibited.